No miracle that 99.8%
of the schoolkids survived

How the children of Kamaishi got through the tsunami 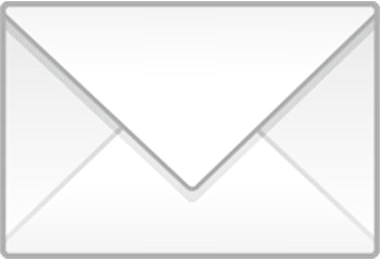 Almost all the elementary and junior high school children of Kamaishi,
a small coastal town in Iwate, managed to survive the tsunami.
Many people said it was a miracle, but it wasn't.
The response capabilities they learned at school helped them to overcome a disaster that exceeded all worst-case scenarios.

Listening to the voices of the dead

I want to start by telling you a story of a young girl. I've been working with teachers to provide disaster education to elementary and junior high school students in Kamaishi for eight years. "No matter how big the tsunami is, there is always something you can do," I told them. "That something is to run." I told the junior high school kids in particular that they should be protectors rather than being protected. In the recent earthquake and tsunami, many of these children did as they were taught.

The young girl was one of those junior high school kids. She was at home when the earthquake struck. After getting through the initial earthquake she hurried to the house of an old woman behind her own home. She had heeded what we'd taught her and thought that her duty was to help this woman to flee. While waiting for the old woman to get ready, the first aftershock struck. She was crushed under a falling chest of drawers and lost her life.

Including this young girl and some other children who were off school sick, five children were unfortunately lost to the disaster in Kamaishi. However, thanks to each and every one of the kids actively putting into practice what they learned and trying to flee, the lives of 1,927 elementary school children and 999 junior high school children were saved. That’s a survival rate of 99.8%.

Of course, the very fact that some children died means that we cannot proudly say that our disaster education was a success. That's why I continue to listen to the voices of the dead, trying to understand what they can tell me about what can be improved. Disaster prevention and management is a practical discipline that is all about saving lives. By listening to the voices of the dead we can work out how to save other lives the next time. 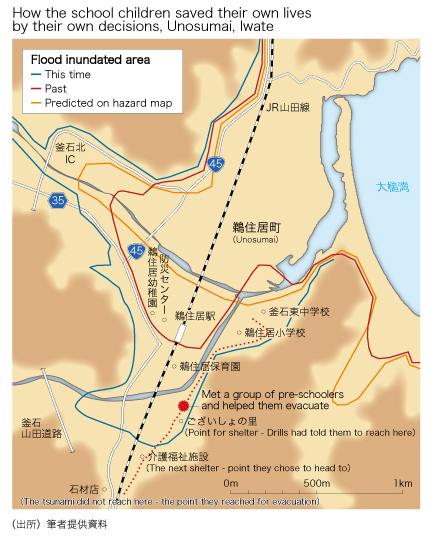 Let me tell you what happened that day at Kamaishi-Higashi Junior High School in Unosumai district of Kamaishi. When the earthquake struck the school's intercom system was damaged and didn't function, but the children took it upon themselves to leave the school. "A tsunami is coming," they said, as they headed for the designated evacuation area "Gozaisho-no-Sato (see map)." The children from the nearby Unosumai Elementary School, who always took part in evacuation drills together with the junior high school kids, followed close behind.