Led by Pakistanis living in Japan, exports of Japanese used cars are growing, thanks to their durability and high technology. In particular, Pakistanis at Ritsumeikan Asia Pacific University (APU) in Oita Prefecture have been very active in the used-car business, using social networking services to build up contacts around the world.

In late November, during the Tokyo Motor Show, the country’s largest, a used-car auction in the city of Oyama, Tochigi Prefecture, attracted a lot of Pakistani buyers. A 38-year-old used-car trader, Hamlin Ozawa, who does business in Mito, Ibaraki Prefecture, had four vehicles up for auction, including dump trucks. Bidding on one of the cars started at \1.92 million, but quickly shot up to \3.85 million. Although the final bid didn’t reach his asking price, Ozawa had a chance to talk to the highest bidder. The following week, he managed to sell the truck he bought for \850,000 for \2.6 million.

“I am making a profit of up to \5 million to \6 million a month,” Ozawa said. “I have associates from Hokkaido to Fukuoka Prefecture, and get a call when they find salable used cars.” Ozawa came to Japan to study at APU in 2002, but dropped out. He married a Japanese woman and, through contacts with compatriots, entered the used-car business.

The used-car industry is now in Pakistani hands. It’s thought to have started when a Pakistani trainee who came to Japan in the 1970s sent four used cars to his home country. This triggered demand for Japanese cars in Pakistan, as well as the number of Pakistanis coming here. It is thought that Pakistanis account for more than half of the people in the used-car business in Japan.

Some of Ozawa’s Pakistani friends and fellows from APU were at the auction in Tochigi Prefecture. One, Naheed Akhtar, 33, followed Ozawa into the business, starting a used-car company in Soka, Saitama Prefecture, last spring. He holds a master’s degree in business administration from APU, and has Japanese nationality. 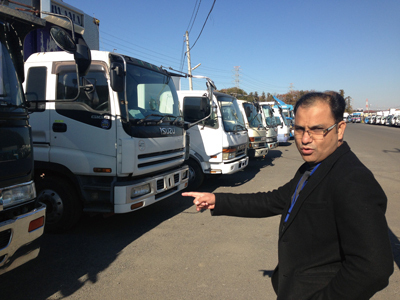