Having grown up in Taiwan under Japanese rule, studied at Kyoto Imperial University, and been to the front as a student during the war,former President Lee Teng-hui loves Japanese courage and embodies the Japanese spirit more than the Japanese.What does Mr. Lee think of contemporary Japan?Ranging from Yasukuni to the Constitution, Mr. Lee talks extensively on a diverse range of subjects.

National leaders naturally say prayers for the war heroes who died for their country. No foreign country has the right to interfere in such matters.My elder brother is enshrined at Yasukuni Shrine because he enlisted in the navy as a volunteer and died a glorious death in the Philippines.This is not a question of politics but one of souls.

During my term of office as president, I used to visit the Martyrs' Shrine in Taipei every spring and fall.People enshrined within e shrine are mainland Chinese Nationalist Party soldiers who died in the Anti-Japan War and had nothing to do with Taiwan.Nevertheless, I visited the shrine to pray for their souls with great love. 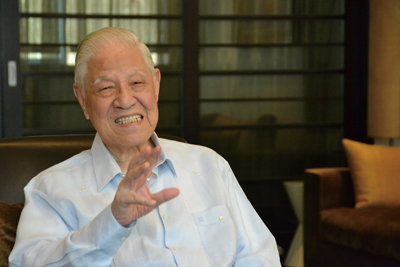 ーYou have always expressed appreciation for Abenomics.

I have argued for the importance of exchange depreciation for more than ten years, but no politician had the courage to carry it through.

There are four roads to economic growth: domestic consumption, investment, exports, and innovation.

Like Taiwan, Japan has no natural resources.Yet, Japan boasts of technologies and development capabilities to create novel products.Exports represent a key pillar of the economy for countries such as ours, where currency exchange plays an important role.Some criticize exchange depreciation as a beggar-my-neighbor policy, but they are mistaken.Increased exports result in increased imports.

However, Japanese prime ministers in the past were fearful of criticism from China, South Korea, and the United States.They had no awareness as the leader of the Japanese people.The key to overcoming deflation is economic and mental independence from international society.