the Executive Director of the Australian Strategic Policy Institute (ASPI) and a former Deputy Secretary for Strategy in the Australian Department of Defence. He is a frequent visitor to Japan and regularly writes on strategic issues at the blog site www.aspistrategist.org.au.

Following national elections on 7 September, the government of Australia has changed hands with the centre-right coalition of the Liberal and National parties winning by a decisive majority. The new Prime Minister is Tony Abbott. The Coalition government will have a strong focus on trade and investment, on cooperation with traditional friends and allies, will promote closer relations with near neighbours like Indonesia and Papua New Guinea, and favour strong defence capabilities. 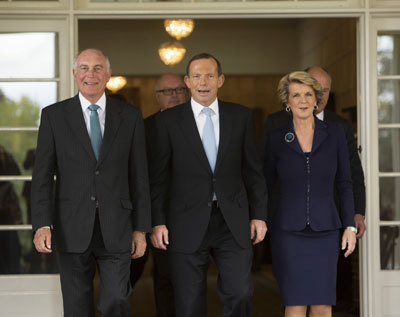 The Government’s foreign policy team are two experienced Western Australian politicians, Foreign Minister Julie Bishop (also deputy Prime Minister) and Defence Minister David Johnston. Both are lawyers, were ministers in the Howard Government, and have deep interests in the Indian Ocean – an area that tends to be overlooked by Canberra policy makers, who usually look north to east Asia rather than west to India and Africa. Bishop is a powerful figure in terms of Liberal Party factional politics. Johnston, interestingly, has a strong personal and parliamentary interest in Japan based on frequent visits to the country.

What does the change of Australia’s government mean for Japan? In a foreign policy statement released before the election the Coalition parties said that they would give renewed priority to bilateral relations by expanding economic relations, finalising the Australia-Japan free trade agreement, and building a stronger strategic partnership. Significantly, the statement went on to criticise the performance of the previous Australian government with regard to relations with Japan:

Japan, Australia’s most steadfast friend and important diplomatic partner in Asia since the 1950s, felt slighted when Prime Minister Rudd excluded Japan from his first visit to Asia. He caused significant embarrassment to Japan by re-announcing, without warning, on the eve of an official visit by the Japanese Foreign Minister, that the Australian government would be taking Japan to the International Court of Justice over whaling.

The reality is that there is strong cross-party support for close ties with Japan. Indeed the Labor Government under Prime Minister Julia Gillard did much to strengthen defence and strategic ties with Tokyo. After years of steady progress in building defence connections, Australia’s strategic ties with Japan accelerated after the triple crisis of March 2011. Australian Air Force C-17 transport aircraft were the first to land in the stricken Tohoku area after Japanese and US forces. Prime Minister Gillard was the first foreign leader to visit the area only days after the earthquake and tsunami. There is no doubt that Australia-Japan defence relations have become significantly closer after March 2011. This trend will certainly continue under the Coalition Government.